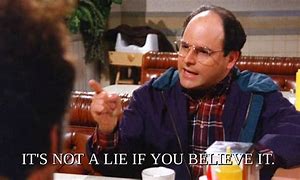 In one of the series’ more inspired scenes, George, with the sagacity of Yoda, offered this parable:  “It’s Not A Lie If You Believe It”.

When all that was at stake was whether or not a cad like Jerry would get his night stick taken care of by a cop, it was funny.  Tonight, in five states holding key midterm primaties, this theory gets to put to the test with more significant stakes. More than a dozen key races in Michigan, Arizona, Missouri, Washington and Kansas feature election deniers as candidates, many witn former president Trump’s personal endorsement.   In Arizona and Michigan, leading candidates for their respective governorships are females with media backgrounds–and scant actual political experience–and are poised to potentially win the Republican party nominations to lead their states, two which Trump has challenged the certified results of how they voted in the 2020 presidential election–states he lost.  Pledging loyalty to him is indeed one of the strongest claims that Kari Lake can make, aside from whether or not she was the reason her Phoenix TV station won a sweep period with the newscast she anchored.  Lake has mocked her opponent, Karrin Taylor  Robson, for refusing to endorse that viewpoint, claiming that “disqualifies” her as a viable candidate.  Lake is leading several polls, unfortunate but not unexpected in a state that had already supported an audit of the 2020 presidential race by the infamous Cyber Ninjas that took up most of last summer–at taxpayers’ expense.  So in a state where brains are already wilting in desert heat, the relentless badgering of Lake is inexplicably being seen by many as an oasis of believability.

It is a further attestment to both irony and gullability that Trump is throwing his support behind female journalists at a time when his legal team informed CNN of his intent to file a lawsuit charging them with repeated defamations of character since 2016.  As Yahoo! reported:

“I have notified CNN of my intent to file a lawsuit over their repeated defamatory statements against me,” Trump said in a statement. “I will also be commencing actions against other media outlets who have defamed me and defrauded the public regarding the overwhelming evidence of fraud throughout the 2020 Election. I will never stop fighting for the truth and for the future of our Country!”

The 282-page letter from Trump’s attorneys to CNN executives, dated July 21, calls for the network to retract or correct numerous on-air statements and published articles about Trump that the lawyers allege are false and defamatory.

The letter goes on to cite dozens of examples, many of which relate to the network’s coverage of Trump’s repeated claims that the 2020 presidential election was fraudulent. CNN coverage frequently referred to those claims as “lies,” “false narratives” and “baseless theories,” among other terms.

The lawsuit alleges those descriptions are “false and defamatory,” in part because Trump genuinely believes his claims that the election was stolen.

“Without regard for President Trump’s genuine belief in his statements, CNN has published numerous articles characterizing him as a ‘liar’ and the purveyor of the ‘Big Lie,’” the letter to CNN states.

And, upon reflection, I guess even I have been guilty of that practice, and in further irony, I was attempting to get people to believe slightly less in the appeal of the Costanza Defense. 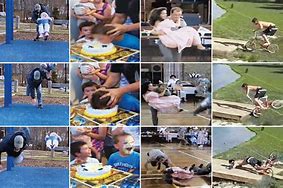 You see, I shepherded a team of researchers who were devising selling strategies for reruns of AMERICA’S FUNNIEST HOME VIDEOS to local TV stations at the same time reruns of SEINFELD were in the marketplace.  For reasons that were both an endorsement of my team’s talents, as well as a way to stretch the size of an overmatched sales staff, my team was given the incentive to directly pitch executives in the smallest markets in the U.S., outposts like Anchorage, Alaska, Boise, Idaho and Jonesboro, Arkansas, among others.  In these cities, the degree of SEINFELD’s popularity was somewhat muted, and, motivated by the potential of bonus commissions, several members of my team were able to successfully convince executives in these hamlets that a far lesser viewed show had greater potential.

So we put forth our own, much lesss consequential version of a Big Lie.  And we succeeded.  So much so, in fact, that the bonuses my team earned were three and four times the estimates our bosses had budgeted for.  Mind you, these were the same leaders who had signed off on our chowing down on $175 orders of truffle-infused grains as “just a rice side dish” at the restaurant at the casino in Monte Carlo.  (I’ve told that story already).

All our “Big Lies” cost the United States were the employment of some otherwise nice but careless sales executives.  So I’ll hope you’ll give me a mulligan. (Oh, BTW, I personally didn’t make a dime extra from my team’s efforts; I was already considered to be too highly paid ; insert guffaw here).