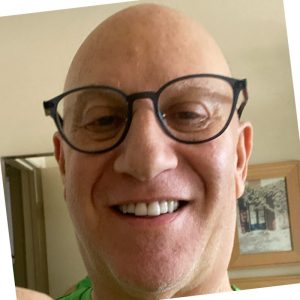 Last night I spent sunset reconnecting with long-lost friends and business colleagues at the foot of the Pacific Ocean, thankfully in person and most without masks.  Tragically, it took yet another premature death to make that happen.

Unless you lived the lives of the beautiful people in these photos, you likely never heard of Tim Krass.  But if you’re a sports fan, or you speak Spanish, or you own a television, or were merely alive before 2010 there’s no doubt he impacted your life.  Tim ran marketing and distribution for FOX and Univision, among other companies, for more than 20 years.  His era saw the evolution of cable television from a business of retransmission to a business of creation, leveraging the power and passion of sports fans and telenovelas to despise their providers every time an agreement between his networks required a renewal.

Tim was a gatekeeper of content, and a cable provider without content is, in effect, a utility.  In an era that predated streaming, this effectively meant you’d be cut off from seeing your favorite team drive for the playoffs or the resolution of a 13-week storyline.  And don’t think the timing of these negotiations wasn’t connected to those factors.  My role in this world of trench warfare was to provide insight and ammunition to hard-driving execs like Tim to make the lives of those running cable systems miserable.  We’d design consumer-centric campaigns to urge people to call their local provider and demand that a network be renewed, price point be damned.  Of course, the provider’s mission was to minimize costs and maximize profits for his (or, occasionally, her) side.  Often, these negotiations were tense and dirty.  Sometimes some execs’ personal phone numbers were furnished to the public, making even their home lives miserable.  When the rights to carry network affiliates were added to these equations in the early 1990s that often meant the timing of renewals dovetailed with New Year’s Day.  Numerous evenings and occasional overnights were spent without families, in sterile conference rooms with takeout pizza fueling high-pressure negotiations that at times resembled those of kidnappers.  Almost invariably, a deal would eventually be made, bygones would be bygones, and life would go on.

It was the life going on part that was both celebrated and lamented last night. 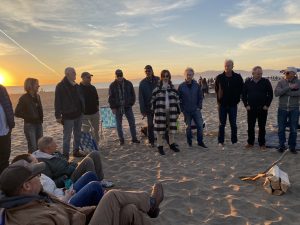 Many highly successful and personally blessed executives shed their designer suits for sweats and warmup jackets and told stories about Tim impacted their lives.  They also told more of Tim’s story, one that later involved addictions, divorce, financial struggle and even thoughts of suicide.  Tim was honest and resilient enough to not only deal with them head-on, he devoted the last decade of his life to the education and counsel of those who shared his struggles.  By the time I connected with Tim, I was one of those people.

The Compassion Catalyst Speaker, Podcast: Time Out For Mental Health, Business and Personal Coaching
Self-employed
Dec 2012 – Present · 9 yrs 3 mos
Greater Los Angeles area and Virtual
Tim Krass now travels the world, speaking to corporate and private groups, both young and old, sharing his personal story and what he has learned from his unchecked mental health issues and how toxic masculinity affects relationships between men and women, both at home and in the workplace.  It is possible to lead a happy and healthy life by managing mental health issues.  But, help must be asked for.
A good friend suggested that I reach out to Tim when my summer of isolation and heartbreak began.   I listened to him.  I asked Tim for that help.  And he listened too. 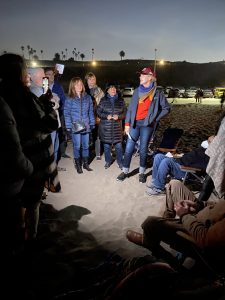 Tim barely knew me; indeed, I can’t recall actually spending any time in a room with him.  But he took my call.  He spent several hours on the phone with me.  He indeed shared his story, powerfully and resonantly.  He threatened to kick my ass if I dared mention that “s” word, and since I knew his athletic prowess was superior to mine I made a concerted effort to avoid it.  Much like the incredibly beautiful roommate who I have previously referenced, his determination and perseverance reminded me that even those who look like successes to the world at large can be faced with life-threatening crises, needing to tap into a resolve and a higher power that many lesser people never would need or have the courage to find.   Tim reminded me that in order to win a game, you had to stay in it.  Between Tim and my other muses, I chose to stay in the game.
Sadly, Tim couldn’t beat cancer.  On a night when we learned he had been scheduled to give his first TED talk, instead business colleagues and adversaries as well as personal friends gathered to salute his memory. We all shared stories.  I saw sides of people I never saw.  It put our negotiating past in its appropriate cubbyhole— in the recesses of our histories—and was a reminder that it is the present and future that is more meaningful.  67 is way too young an age for the game of life to end as it did for Tim late last year.  I’m not that far away, and some of those who spoke have already sped past that marker.
I’ve lost quite a number of people in my life lately, many of whom I had planned to see “when the pandemic ends”.   It ain’t ending anytime soon apparently.  Fortunately, even “science” is waking up to that reality.  So it didn’t stop these wonderful people from showing up in the flesh, some schlepping cross-country, to gather on a beach to celebrate life.  FWIW, I asked that all in attendance who felt comfortable enough to do so to take a page from Tim’s playbook and hug someone there who they had not seen in a while or had indeed never hugged.  And since I never experienced the Tim Krass hug that so nany others who spoke described so vividly, I personally put in a plea for a few of those hugs to be given to me.
I got six.  Six more than a typical day offers of late. 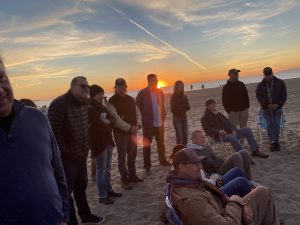 I’m honestly hopeful that some of those hugs will turn into friendships– perhaps even business leads.  Virtually every successful move of my career involved a direct interaction.  The world has denied me those chances for most of the last two years.  It sickens me every time I see someone cross the street when I dare to bare my lips while I walk or would get an e-mail from someone telling me they’re “staying safe” until “after the surge”.  I’m respectful of people’s wishes; but Tim’s story is a reminder that sometimes we have to be aware of surges and ticking clocks that supersede those of COVID-19.   Tim’s death got people out of their homes, out of their comfort zones, and into a mindset of shared reality that, at least for a couple of hours, was a nice reminder that interactions aren’t a thing of the past.
G-dspeed, Tim.  Hugs are wonderful.  Sending a few up your way.
Until next time….