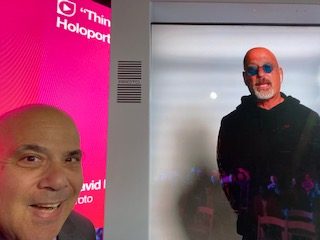 Howie Mandel took a selfie with me, and I got to touch the Our Lady of the Amazon statue yesterday.  And while I was physically in separate locations, our worlds indeed were one, and the experiences transformational.

At the Infinity Festival Hollywood, which kicked off three days of in-person presentations and exhibits yesterday at the tony Goya Studios. I had the opportunity to learn first-hand the immense progress and potential virtual, augmented and mixed reality have and will make on the production of content.  While I’ve had some prior exposure to this sort of technology on prior occasions, this was the first time I really got a chance to see it, be literally in the middle of it and, most of all, become yet another evangelical about it.  (Which, I suppose, for the sponsors and contributors that participated, was one of their overarching goals).

Mandel, along with his business partner David Nussbaum, headlined yesterday’s sessions with a demonstration of a contraption known as Proto, which allows for holographic, 3-d remote participation and performance for live shows and productions.  From his comfy Van Nuys home, Mandel–or at least his Princess Leia-like imagery, was able to ask as spokesperson and fully interacted with the enthusiastic attendees, who, like me, were so inspired literally rushed the stage to capture the moment with a selfie.

The pandemic, let alone the ongoing economic downturn, has accelerated both the need and the opportunity for workarounds like this to become incorporated into video productions.  The further irony that Mandel,  already widely known for his aversion to shaking hands, would be keynoting this virtually wasn’t lost, but the impact ultimately just as effective as if he were there in the flesh.  Nussbaum, a production veteran of note himself, steered the proceedings effectively on site. 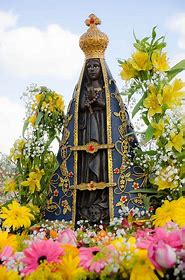 The day’s ensuing panels and exhibits further drove home the point that technology, more than ever, needs to be embraced by entertainment, and vice versa.  Several exhibits showcased other innovations, such as the aforementioned VR technology that incorporated tactile interaction with a 3-D printer representation of the Brazilian statue that believers would otherwise flock to South America to reach out to for the energy that supposedly heals and inspires millions.  By actually wearing a headset, and experiencing this 360 degree virtual world first-hand, the impact and ability to process the possibilities was far stronger than any video or zoom meeting could ever be–at least for me.

And, of course, the opportunity to actually see people, both famiiar and new, in the flesh, exchange contact information, and (gasp!) shake hands was exhilirating unto itself.   On a day where several media and tech companies announced extremely disappointing financial results, dour forecasts for the immediate future and thousands of layoffs (including many of my former Sony Pictures Television colleagues, among far too many others), the crying need to incorporate the efficiencies and creative leeway of these innovations was more obvious than ever.  Physical production is a fixed cost. Finding new ways to help it along may yet jobs of those who still have them, let alone create new paths for those that now need them. 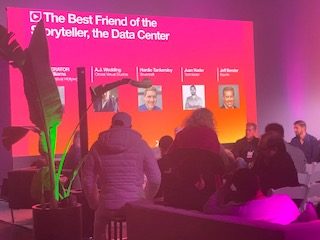 Best of all, the Infinity Festival is continuing through tomorrow afternoon.  If you’re anywhere near Hollywood, you can log on, or even show up on site, and for a small fee join the festivites yourself.  The schedule link is below.  There’s quite a number of exciting and informative presentations on the docket, and even me in person (quintuple vaccinated, in case you’re concerned).

Stop by.  Save me a hug if you do.  After yesterday’s roller coaster, I could sure use one.