If you’ve been dropping by this site in recent days, more than a few of you are beginning to notice that my observations may have grown a tad darker in tone than usual.  That’s what happens when you’re confronted with the grim reality that all of the hard work, effort, and investments of blood, sweat, tears, and, yes, money, has yet to bear any significant financial return.  And for those of you who continue to judge me strictly on that basis–and that includes an awful lot of companies I owe plenty to–I’m no better today than I was earlier this week. But last night I was able to draw a smidge of inspiration from the sight of a new season of S.W.A.T. debuting on CBS–its sixth in this incarnation, or three times as long as the original version ran  on ABC beginning in 1975.  A show I’m very proud to say was one I helped contribute to relaunching, and one that has served as inspiration for the opportunity of comebacks and reinvention.

When I came to Sony, one of the writer/producers under contract was Shawn Ryan, who I had crossed paths with during my FX days.  His most enduring and impactful show, THE SHIELD, kick-started his career, as well as mine.  It lasted seven award-winning seasons, arguably created the business of quality scripted dramas for areas outside traditional television, and was honestly the greatest career accomplishment at least I’ve been involved with along the way.  So seeing his smiling face on his shaven head was one of the more familair and welcome sights I was greeted with.

Ryan had gone on to create and co-produce a few more dramas following THE SHIELD, including an underappreciated show for CBS, THE UNIT, that told the stories of members of a counterterrorist unit from both their professional and personal sides, calling to mind that in wars sometimes the most impacted victims of those who fight them are the loved ones they leave behind rather than the hated ones they do battle with.  After four modesty rated years, CBS chose to renew a show they owned outright with similar performance, COLD CASE, and left THE UNIT a few episodes short of what was then considered to be the 80-100 level that most viable series with rerun potential for top dollar could command.  To their credit, Twentieth TV sold the 69 episodes that were produced to a number of different outlets simultaneously, including a cable network, a superstation  and My Network TV, where it often performed competitively, but didn’t quite make as much as it should have. Ryan had a number of other acclaimed but far shorter-lived shows besides those, including the well-received but ratings-challenged TIMELESS, which was the first Sony project I spent time with him on.  During the fight to get that show noticed and renewed, I learned of the opportunity he was presented with to reinvent S.W.A.T.  It wasn’t the first time Sony wanted to do something with that IP; a 2003 theatrical movie tried to do the same thing, with Samuel L. Jackson as the lead.  That movie didn’t do all that well, and Jackson was clearly not going to do television.  But when Sony did bring it back, its iconic theme song, which rose to number one of the Billboard charts when the original version premiered, was fondly remembered, and they knew something was there. 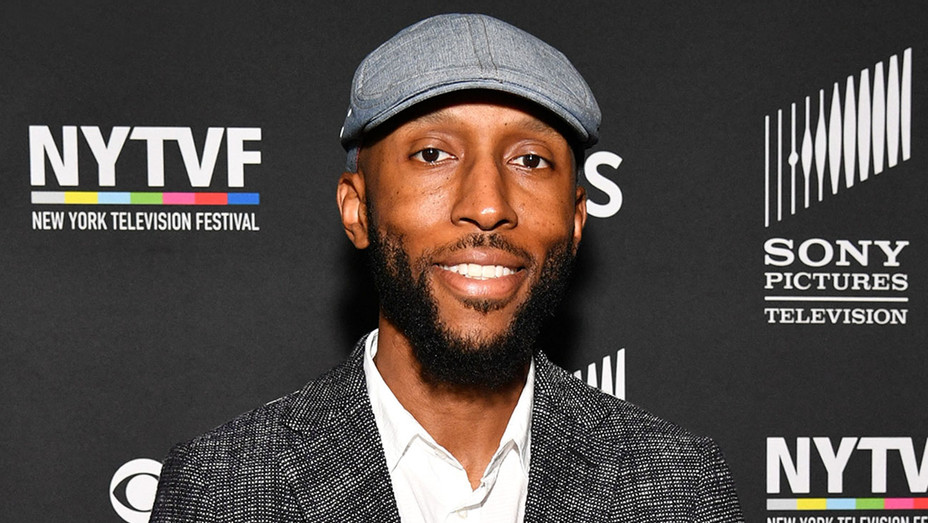 Ryan had a vision, and with his work on THE SHIELD he knew the world of Los Angeles police well.  But he wasn’t as steeped in how that world impacts the lives and career opportunities of African-Americans.  So, much like Norman Lear did in embracing Gloria Calderon Kellett to bring her iteration of ONE DAY AT A TIME into focus, Ryan joined with an acclaimed writer who had such a background, Aaron Rashaan Thomas.  And CBS had had some success in reinventing the back stories and characters of HAWAII FIVE-O, and was looking to emulate that success elsewhere.  They were open to co-productions, and Ryan rightly believed they owed him one. 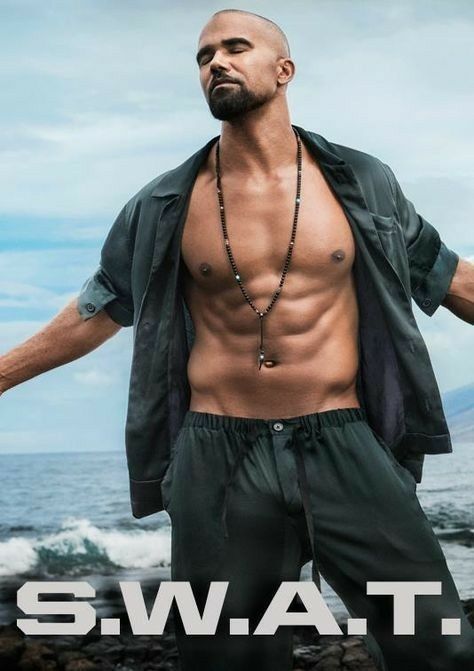 So Ryan and Thomas, as did Lear, borrowed the names of, but not the original backstories, of the 70s  version.  Team Leader Daniel “Hondo” Harrelson was now someone who grew up in South Los Angeles and given a promotion to help tensions between the community and the police.   And in Shemar Moore, a veteran of both Sony’s YOUNG AND THE RESTLESS and CBS’ CRIMINAL MINDS,  they had the ideal lead.  When the pilot was tested, audiences loved seeing him shirtless as much as they loved seeing the action and tension. It premiered decently, often winning its time slot, especially among women 25-54. 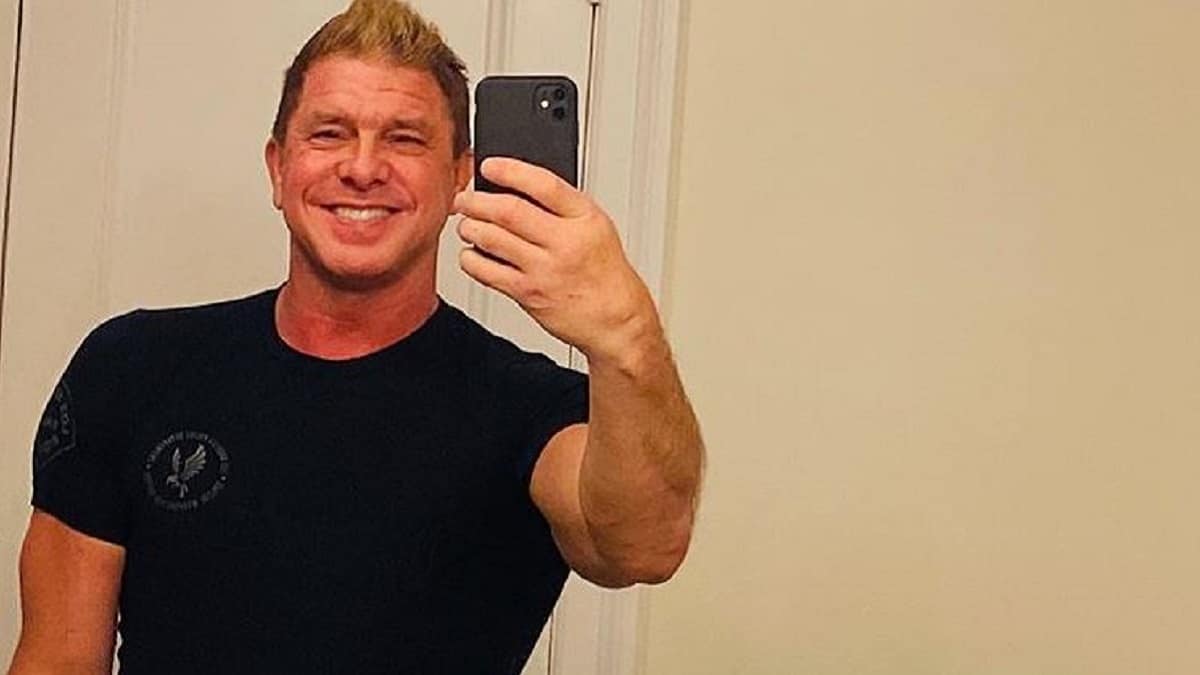 But for a variety of cost-related reasons, every renewal was a dogfight.  And the Sony personnel, very eager for a show with enough episodes to be sold in reruns at a decent price, fought as hard with CBS to get their desired result as the team did to get theirs against drug dealers and criminals.  Much like THE SHIELD, I got to bond and connect with many of the cast and crew members, most notably Kenny Johnson, another SHIELD alum who portrayed the reinvented Luca character from the original version.  Kenny fought through health issues of his own to return to the show shortly before I departed, when I had my own serious battles.  One of the last conversations I had on the lot was with him, comparing notes on how to get healthier.  He was especially eager for the show to be renewed, not only for the income, but also for the chance to continue his character’s arcs.  We got that renewal shortly before I departed the company (for good, it appears).

When I left, my personal life changed dramatically, but the show still was prominent in my life.  Several of the people I knew were up for bit roles on the show, and I knew it intimately.  They essentially made me their de facto acting coach, and I had the unbridled joy of helping them with auditions.  One of the current version’s newer and more controversial characers was female member Chris Alonzo, played by the compelling and super fit Lina Esco.  Chris was initially attracted to her co-worker, the cocky but earnest Jim Street, but later evolved into a relationship with both a man and a woman–one of the first “throuples” to be explored on network television.  For a CBS procedural, it was clearly unfamiliar fodder.  But It was honest, raw, and Esco was wonderful in both the emotion and sensitivity she used in portraying it.  And yes, she’s beautiful, too.  One of the people in my life was especially intrigued by this character, and as she and I watched several older episodes I later learned why.

No, I won’t go into details beyond that.  But I will share what Esco shared with her fans when she announced she was leaving the show before the current sixth season began production: 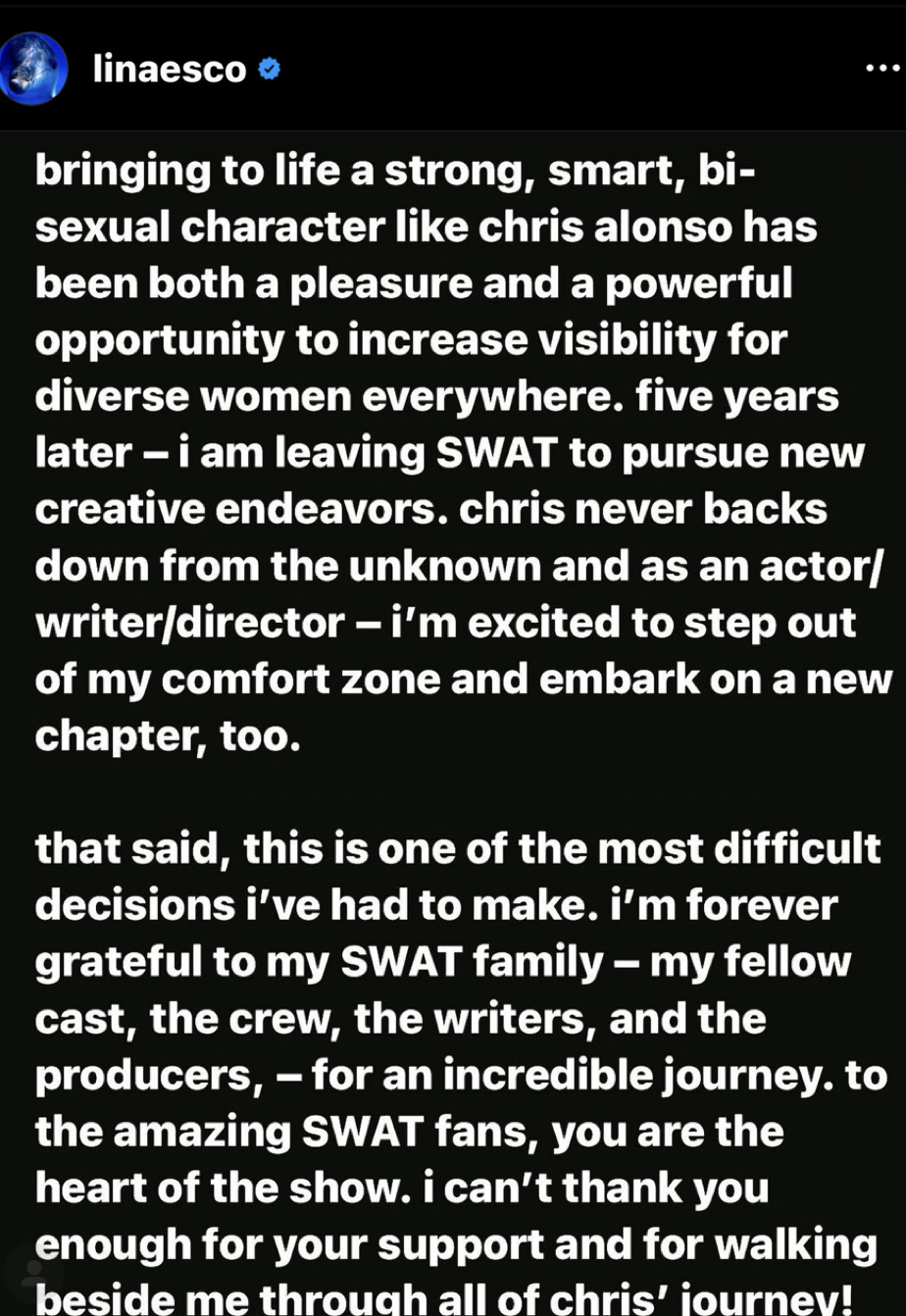 And that’s about as much dog whistling as I’ll offer.

Suffice to say, every single person and image I’ve shared makes me emotional, and, yes, I’m still pretty raw.  Financial struggles and reminders of shattering heartbreak can do that.

But S.W.A.T. is back.  And yes, its reruns are now available on several different networks and platforms; my understanding is that they sold for a fairly decent price.  And for my friend Shawn Ryan, it’s now his longest-running series, with 128 episodes slated to be completed by the end of this season–35 more than THE SHIELD produced.  So I’m thinking he’s in pretty good financial shape.

Maybe, just maybe, there’s a message there for me as well.

I’d often joke around Shawn that THE SHIELD bought me my house, and S.W.A.T. was keeping a roof over my head.  Both of those homes are now gone for me.  I’m still hoping at least the inspiration it gives me might still do that.