In the same week when President Biden told the world, or at least those who watched 60 MINUTES, that “pandemic is over”, and when even the ubercautious Los Angeles County finally aligned with the majority of the U.S. and rescinded the mask mandate for public transportation and airports, the Los Angeles Times carried this op-ed piece with this imploring and declarative headline, and this emotionally charged image to underscore its impact:

No, Mr. President, the pandemic isn’t over

Author Eric J Topol went on to give a series of grim numbers and facts to support his points:

There are 400 to 500 Americans dying of COVID each day, and that high daily death toll has remained constant for the last six months.

It’s not just the deaths. There have been more than 2 million confirmed new COVID infections in the last month, and considering the untested and unreported cases, the real number is a multiple of that, most probably at least fivefold.

Some percentage of these people who get infected or reinfected will develop long COVID, manifesting chronic and frequently disabling symptoms for many months or years.

We should encourage all eligible Americans to get the new boosters, which are fully aligned with the current BA.5 variant that accounts for almost 90% of cases. Yet the uptake has been disappointing, leaving the nation highly vulnerable. And now the president has declared “the pandemic is over,” which surely will not help to get more Americans boosted.

Two intertwined, troubling issues also illustrate why that statement is disconnected from the science.

First, there is now strong evidence of imprinting, meaning that after being exposed to an earlier strain of COVID-19, we do not mount as strong an immune response to new strains. This gives the virus a further edge. Not only are some new variants more evasive of our immune system, but also our bodies are less capable of taking them on when we do fight back.

For the record, I’ve got two vaccines and two boosters, and I’m scheduled to get a third as soon as my local pharmacy can actually make good on their promise to have one available.  So I’m not part of your problem.

Your problem is YOUR credibility–not to mention that of the Times.

You were identified by the Times accordingly:

Eric J. Topol is a professor of molecular medicine at Scripps Research and author of the newsletter Ground Truths.

The image the Times posted was from January 2021.  When vaccines weren’t fully available, people had to drive for miles and stand in lines like that because the distribution system wasn’t fully baked, and people under 50 who didn’t fit a certain, specific list of criteria (first responder, teacher, employed, living in a lower SES area) weren’t even allowed to get in that dystopian line.

And the Los Angeles Times is currently owned and run by a billionaire described this way: Patrick Soon-Shiong (born July 29, 1952) is a Chinese-South African transplant surgeon, billionaire businessman, bioscientist, and media proprietor. He is the inventor of the drug Abraxane, which became known for its efficacy against lung, breast, and pancreatic cancer.

I personally know many medical professionals who have realized financial gains since the pandemic began, being paid overtime to administer treatment and giving detailed information on how much their employers are compensated per shot.  How they are actually encouraged by insurers to list patients as being treated exclusively for COVID even when there are a myriad of other factors that contribute to their hospitalizations.

Those 400-500 deaths per day and the 2 million cumulative infections that Topol describes are tragic, no mistake about it.  And just so you don’t get any weird ideas, I don’t believe hydrochloroquine, bleach or even children’s blood will do a better job at preventing them.

But honestly:  if and when anyone in the medical community actually gives a detailed breakdown of exactly how interdependent the COVID diagnoses are from any other immunocompromisings, co-morbidities, diets or family histories that might have also contributed to these patients’ illinesses, I’ll be less skeptical than I am now.

And until anyone in the airline, travel and/or food industries can explain to me in detail exactly how this virus is not only smart enough to mutate, but it knows exactly when someone is “actively eating or drinking”  or a family relation to somehow put any infection or transmission on hold, thereby making it ok for people to remove those face diapers and pig snouts that you have conditioned people to believe are necessities, even driving in their cars alone or outside in gorgeous weather, I might pay more attention to op-eds like yours.

We are a highly polarized nation for many reasons, many of them truly threatening.  But continuing to push a narrative that clearly results in favorable financial benefits for your employers and investments, even when a double-boosted, double-vaxxed Democratic president, with access to many more and even more qualified opinions than yours, comes to the conclusion that the pandemic is “over”–after twice having gotten and quickly recovered from COVID a few months short of 80, mind you–adds a lot of oil to my fire.

When someone as insignificant as I am points these things out to people who continue to choose to live their lives in such obsessive fear, I’m often ostracized and considered a lunatic.  And after nearly two years of this imploring, pleading, and consternation, it’s honestly exhausting.  There has been far too much long-term damage to other industries besides medical research that have been caused by what you consider to be following the principles as set down by Hippocrates. 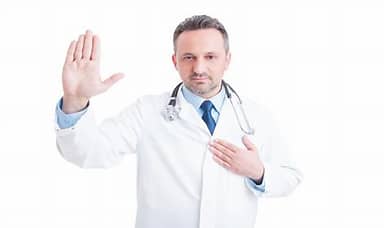 According to Study.com, here are the salient points of the oath that every physician takes:

I do believe that the actual people who have given me my vaccines, not to mention the other life-saving treatments I’ve recently relied upon that have not a damn thing to with COVID, ascribe to these virtues.

But they’re not doing it for free.  They’re doing it largely as a result of the business model that “science” has built, and is hell-bent on continuing to keep pushing.

Last night I was an outdoor service for the Jewish New Year. Two middle-aged women were seated behind me, unmasked, but yakking away nonstop about how unusual this was for them, how their friends and spouses contracted COVID at a recent indoor event, how so many people in their world received alerts about close contact, and how the panic amidst their inner circle resulted in cancelled plans, isolations and other disruptions.  They almost appeared determined to one-up each other as to who was more defiant in attending this service showing their full faces.

I honestly was getting sick to my stomach listening to this needless drivel, especially in light of recent findings of actual transmission rates and degree of long-term impact being nowhere near what they were when that Times photo was taken.

I glared at them and quietly said “If you’re so damn concerned about the virus, maybe you might want to shut your mouth so there’s less of chance you’ll get it”?   They stared at me like I had called them MAGAs, and then continued to bitch.

So I moved to another seat and sat near some truly wonderful new friends, and yes, we hugged.  And I’m not sick–certainly not as sick as I felt listening to the worrywarts from earlier in the evening.

If I weren’t so loyal to newspapers in general, I might want to stop reading the Times.  That’s my co-morbidity, I guess.

But as long as hypocritic pleas from ethically compromised “experts” continue to be published, I’m gonna avoid the op-ed pages for a while.

3 thoughts on “A Hypocritic Oath?”