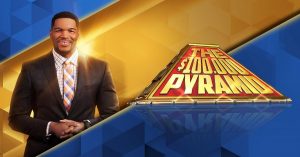 Tonight marks the delayed fifth season premiere of the current iteration of THE $100,000 PYRAMID, my all-time favorite game show and one I had the pleasure of working on three different versions of,  (I should have been involved with a fourth, but as a teenaged game show geek I was deemed “too good for TV” by the show’s brilliant but frugal producers during my college years.  More on that later…)

The Michael Strahan-hosted version that marked the show’s return to both the network and the city that launched the most enduring arc of its 48-year history has been one of the most-watched staples of the ABC Summer Fun and Games scheduling that has worked like a charm for the network and its champion, unscripted programming czar Rob Mills. It is generally conceded that the end game, with the ticking flute clock, the unavoidable playability of the format (who HASN’T yelled a clue suggestion from the kitchen into the bathroom while watching an episode?!? ) and the adrenaline rush of life-changing money being at stake with the top answer, is THE best end game ever conceived. With a little luck in its new Wednesday time slot,,this could easily be the longest-lasting run of its history.  (It’s already only one behind in number of years, although 2020 was lost due to the pandemic and scheduling–these episodes were taped last summer).  But it wasn’t that simple a return to glory.

For reasons that can only be attributed to creative arrogance, Columbia/Sony struggled through the 1990s and 2000s with numerous failed pilots, including ones that raised the key elements to gargantuan proportions (SIX “celebrities”!!  A MILLION dollar top prize!).   Two seasons of a Donny Osmond-hosted version, called simply PYRAMID, for first-run syndication that took a bright and cheerful set and turned it into a haunting and daunting chamber of horrors.  40 episodes–38 of which were airable–of a Game Show Network version, now called a bit less simply THE PYRAMID, which in hindsight will be known as the show Jeopardy! producer Mike Richards hosted before his run earlier this year.

After all of those failed attempts, producer Vin Rubino heeded the instincts of smart business partners (ahem: including me) as well as his own intuition and rationalized:  If it was truly successful before it was changed, why change it?!?  Sure, let’s use technology where we can (art cards are SO 20th century!) .  Vin was smart enough to hire a number of true game show passionistas for his team that lovingly embraced the challenge of producing a successful version for this century.  And it WORKED.  And it gave (ahem again) yours truly a chance at his own redemption.

For the first time online, we share how the failed college kid finally got his crack at being in the Winner’s Circle.  The segment is self-explanatory.  The prize money is fake but the emotions are real,  My eternal thanks to Messrs. Van Amburg, Van Amburg, Erlicht, Parnell and Rubino as well as Ms, Jacobs for the most heartwarming five minutes of my life.  And proof that no matter how long it takes to get something right–even more than 100,000 tries–as long as you’re breathing one has a chance to accomplish what one never thought was possible.

Enjoy it.  Enjoy this season.  And remember that when you give a list of things that fit the subject without using your hands you are indeed speaking a form of Leblanguage.

PROGRAMMING NOTE:  As a bonus, my recent contribution to THE GREAT SCOTT PODCAST can also be found today.  We vamp on this and ofher game shows, the industry in general and take a couple of deceased producers to task.  If you have a lot of traffic this weekend feel free to use it as a sedative.