Frankly, my advice would be to call him whatever he’d prefer to call be called.

However, if you happen to be the President of the United States, you’d call him a Lifetime Achievement Award winner, and bestow that honor upon him.  As Markos Papadotos of True Hollywood Talk reported last New Year’s Eve: Celebrity bodyguard Adriano “Bubba” Almony has a major reason to be proud. He became the first bodyguard in American history to receive one of the nation’s highest civilian honors, a Presidential Lifetime Achievement Award.

He was bestowed this honor by President Joe Biden and earned special Congressional recognition from Congresswoman Sheila Jackson Lee for his well over 4,000 hours of community service in his lifetime and leadership excellence across the Nation. This is a prestigious National White House award and the highest level of the President’s Volunteer Service Award.

“I’m the first bodyguard in history to ever receive this high honor. God is truly divine,” Almony exclaimed in an effusive post on social media.

He’s on social media a lot, actually.  That’s how I first came to know of his existence.  Turns out he has a connection to a special friend of mine.  And while the world was in lockdown, he utilized the power of social media, as well as his track record, to interact regularly and remind anyone who chose to connect that he’s anything but a one-way celebrity communicator, though that’s what he does for a living. 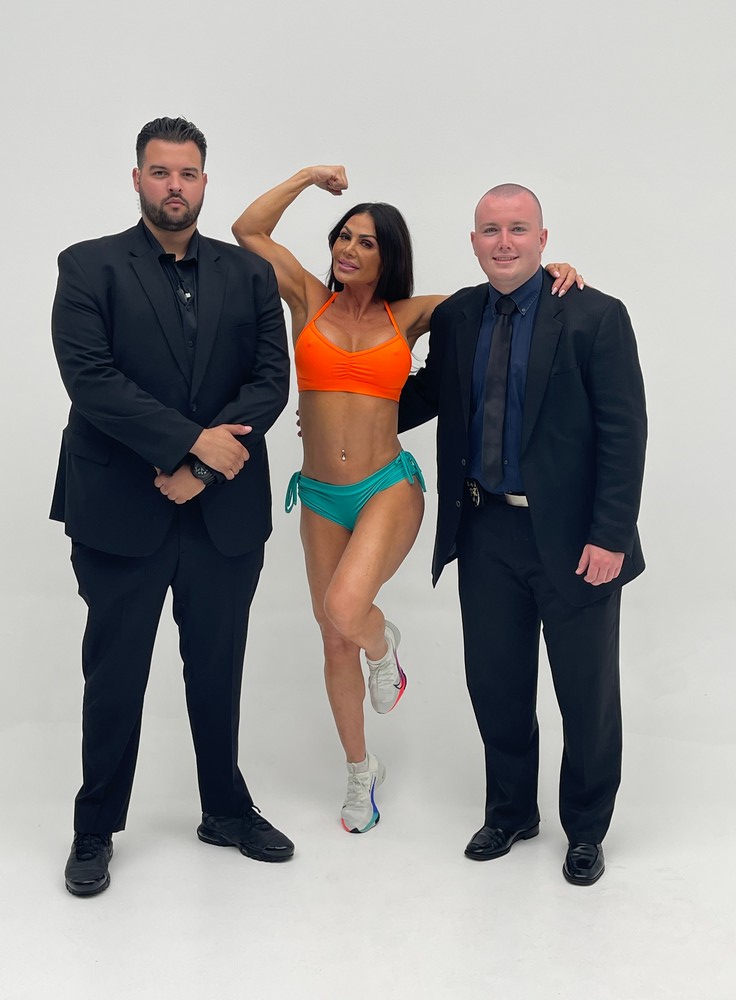 And at 6’1″, 275 pounds of mostly muscle, he’s definitely imposing.  Even the most capable and fit people occasionally need protection, particularly if they’re at public events where the chance of someone getting out of line is enhanced.  As you can see, my friend (the one in the Dolphin colors), is likely capable of kicking your ass, and I am certain she can kick mine.  But as Almony reminded me when we spoke, his primary job is to make sure something like that never happens.

“If I do my job correctly, you’ll never notice me.  I survey a situation and venue thoroughly before we even attend it.  Where the fire exits are, where the nearest hospital is, what roads might be under construction.  My goal is to make sure nothing goes down, and that everyone has a good time.

And as he told Dustin B. Levy of his hometown paper, the Hanover (PA) Evening Sun, his protection comes from an even stronger source.

As a student at Anunciation of the Blessed Virgin Mary Catholic school in McSherrystown, Almony said he developed a strong sense of morals and learned to keep his faith close.

That faith is what has tethered him in the high-profile, and at times high-stress, career of bodyguarding the rich and famous.

“A lot of people just think you’re just kind of there looking cool next to the celebrity,” Almony said.

Among his more prominent clients is Dr. Khalilah Camacho-Ali, widow of “The Greatest”, Muhammad Ali, and over his career has served numerous others.  As Levy continued:

As Almony built his resume, he made more connections with influential people, like SwiftOnDemand, an artist and producer for rapper Cardi B. People seemed to quickly pick up on his trustworthiness, Almony said. His Instagram account, which has more than 22,000 followers, includes testimonials from the likes of NBA star Dwight Howard and Grammy nominated record producer James Worthy. He has accompanied stars to top nightclubs and New York Fashion Week.

“I’ve just been really blessed to be around some of the people that I’ve been around,” he said.

But it’s not just his ability to protect that makes Almony stand out.  He is also a prolific volunteer, coaching high school and boys’ basketball teams near his home in Fairfield, New Jersey.  The day we spoke, our conversation was delayed because he had a late game (his team won, of course).

And he now hosts an annual charity game in Ocean City, Maryland in the summer that the likes of Terrell Owens has attended.  He also donates time and part of his earnings to the likes of St. Jude’s Children’s Research Hospital, and is an advocate for numerous anti-bullying campaigns.

But for Almony, celebrity is something earned by action rather than acclaim, and as he further explained to Levy, success is not about status or money, but “who you’re inspiring, what you’re giving back and who you lifted up.”

I’m much more impressed with the person he is rather than the stars he’s protected, although I’m indeed grateful he’s kept my friend out of harm’s way.  I’m kinda fond of Jersey natives who know quite a few martial arts anyway, and I know if somewhere down the line should my path cross one such person again I’d really like to have Bubba by my side.

Considering who he has accompanying him, I’m all the more confident that I’d somehow be OK in that situation.   As he exclaimed to Shoutout Miami:

All the glory is to God!